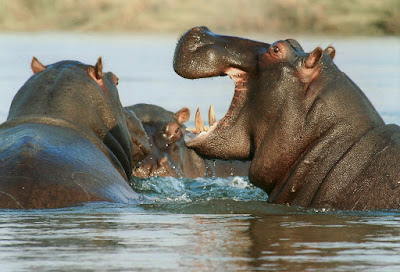 You cannot get a more obvious and intrusive alien invasive species running wild in a foreign land than hippos and in the normal course of events such a situation should not happen but in the case of the infamous drug lord Pablo Escobar in Colombia and his private zoo at Hacienda Napoles it did and it is now causing scientists consternation and disagreement.

Pablo Escobar managed to legally and illegally import into Colombia a whole private zoo from all parts of the world in the 1980’s and these included four illegally imported hippos. How its possible to smuggle such large animals into a country is another matter, but there were also giraffes, elephants, kangaroos and many other species.

Hippos left to fend for themselves.

When Pablo Escobar was killed in 1993 most of the animals were left to fend for themselves including the four hippos who took up residence in a local river and in the space of thirty years have allegedly increased their numbers to a staggering 80-100. A wonderful breeding achievement proving that you do not necessarily need a bunch of scientists in a zoo with their artificial insemination to breed animals. But some scientists and conservationists hate invasive species and prefer everything to remain in its right order and place as nature intended. This is because in some circumstances they eradicate indigenous animals and plants and muck up the ecosystems and biodiversity and the knee jerk reaction is always to kill them.

In this case, because of the difficulty and expense in relocating them, and the fact that the locals love them, are making money out of tourists visiting them and fingers crossed no one so far has been seriously injured or killed, they are at the moment being left alone. There have been attempts to neuter them but with so many this is now proving impractical. Some university study groups and scientists have wildly estimated that there could be as many as 1,500 by the year 2035 if the Colombian government do not act now. But unusually in such cases the Government are presently protecting them.

One of the greatest challenges of invasive species in the world.

One has to wonder why there wasn’t earlier intervention to remove them before their numbers got out of control and why wildlife rescue, university study groups and scientists didn’t step in sooner. One group has stated that they are “one of the greatest challenges of invasive species in the world”. but now that they are situ I am all for leaving them be as they now obviously form a colony outside of Africa which could prove useful in the future. And there are many studies in progress to monitor them so there could be many lessons to be learned from leaving animals to without our intervention.

Invasive species are a worldwide problem mainly caused as always by the hand of humans abandoning exotic pets or historically introducing them to benefit human occupation. In Australia and New Zealand it is feral cats and dogs, in Europe it is animals like the coypu, in the USA it is alligators, turtles and snakes. In the UK it is grey squirrels, mink and ruddy ducks. They are blamed for all sorts of things by us which is a tad rich when the major invasive species at work on the planet has always been homo sapiens wherever they have decided to take up residence and irreparably destroy the local biodiversity.


They do not necessarily need us but we need them.


What became completely apparent during the recent worldwide Covid-19 lockdowns is that wildlife would not miss us at all if humanity was to suddenly disappear or reduce drastically in numbers. Wildlife appeared to enjoy this brief hiatus from us finding they could wander freely, unhindered and safe from interruption. They quickly decided to invade our space instead of the other way round. There is probably a great irony somewhere in all this.
Of course, it is a different story for companion animals who are so dependent on us and have seen a lot more of their owners during this period and may be shocked at normality again.
There have been numerous news reports from all parts of the world of timid species being emboldened to explore and venture into territory that was out of bounds just weeks before because of less human activity and even roaming the urban areas. And road kills lessened at an opportune time in many parts of the world for the spring breeding season. There have already been reports of more hedgehogs in the UK this year.
Unfortunately for them it may not take long for the normality to resume and they will be pushed back into their small enclaves and run the gauntlet of human contact. Although we set aside large swathes of land in the name of conserving animals and habitat and give them such impressive names as national parks, reserves and conservation areas, in reality they have become giant adventure playgrounds for us to enjoy mountain biking, hiking, picnicking, rock climbing, kayaking and any other pursuit we can think up with no consideration given to the disturbance to the animals. Far from being safety zones for them we increasingly invade these spaces, and if they should dare to retaliate by attacking us, we kill them.
Bears in U.S. national parks were able to roam freely and unhindered without having to take detours round vehicles and camp sites and they do not have to worry about confronting humans. Rangers have reported a huge increase in bear and wildlife sightings and stated that the bears are “partying” in Yosemite national park. Lions in Kruger national park also took the opportunity to roam freely and sleep wherever they pleased and enjoyed some peace and quiet even taking a nap on the park roads without being surrounded by hordes of tourist vehicles.
Hopefully somewhere in all this there might be a salutary lesson to us perhaps even making us appreciate nature more and an understanding that animals require their space and freedom just like us. Perhaps we should even give some serious thought to whose benefit many of these preserved areas are truly for and put restrictions on the ultimate predator from entering them.