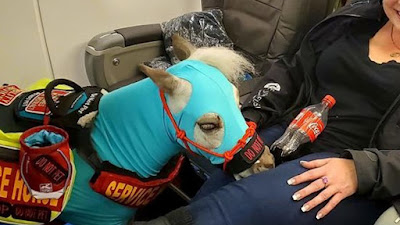 An end to the farce.

Finally, the US Department of Transportation (DOT) took action in December 2020 to amend theAir Carrier Act and restrict carriage in the cabin of Emotional support Animals (ESA) to proven trained service dogs which have been individually trained to do work or perform tasks for the benefit of a person with a disability”. Under the new rules, animals such as pigs, ponies, turkeys, snakes and possums and other exotic animals will rightly be designated as pets and must be paid for and travel in the holds.

Airlines now have the leverage to refuse to take animals and it is not surprising that within weeks virtually every US airline immediately banned ESA’s. Alaskan airlines were the first quickly followed by United, American and Delta. United airlines have stated that “the change will further ensure a safe and accessible travel experience for our customers”. Well any sane person can understand that, but there has still been an outcry from individuals insisting they need a cockerel or a peacock or crocodile or whatever to steady their nerves.

Very little to do with Emotional Support

I wrote an article a year ago on the farce of so-called Emotional Support animals in America varying from ponies to possums being allowed in the cabins of aircraft to ease the flying worries of their owners. How much of it was ever genuine is obvious as it appeared only to be a chance for people to try and outdo each other with photographs and video on social media or enable their pets to travel free. Agencies suddenly sprang up to provide dubious accreditation for the animals and also online sites offering fraudulent certificates. 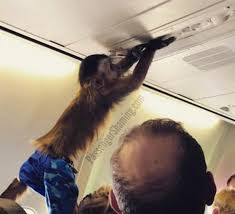 The number of ESA’s carried on aircraft jumped from 481,000 in 2016 to 751,000 in 2017 and a 14% increase in 2018. And there has been a sharp increase in “negative incidents” caused by animals and we can imagine what these were. Strangely many cabin crew appeared to welcome these animal passengers.

The airlines quite rightly have been arguing about the stupidity of the situation for a long time and pointed out all the health and safety issues involved to both cabin crew and other passengers, but it had fallen on mainly deaf ears until now. The Airlines for America lobbying organisation has been pushing for the change for over a year. The question is what took so long?

The Farce of Emotional Support Animals

Why are airline safety rules flouted to accommodate pets. 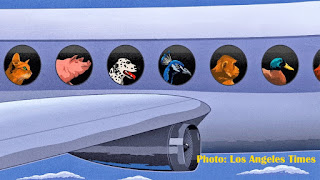 Here is a conundrum: what is the difference between a companion pet and an emotional support animal or an ESA as they are generally called?

In a rational world the answer to the above question should be that there is no difference as ESAs are just people’s pets. I have always been under the impression that companion pets were bred over generations to perform this purpose, but for some reason we feel the need to give some of them special status. But the real question is whether by just giving them a different title they should be allowed to be used to cause so many problems for airlines and their passengers.

For those not familiar with this relatively new phenomenon, an ESA is an animal "not trained to perform a specific task to aid a disabled person in the way that service animals like guide dogs are, but only provides comfort and support in the form of affection and companionship for any individual suffering from a mental or emotional condition".

ESAs have no legal status

Service animals have many legal rights in most countries such as accompanying their owner into hotels, restaurants and on board aircraft whereas an ESA has no legal status, but a few countries such as the USA appear to foolishly allow them to travel in aircraft cabins and they are now paying the price. ESA ownership and registration has become a burgeoning industry in the USA, fraught with accusations of fraudulent use.

For a pet to become an ESA they have to be certified as serving a purpose by a health professional so that they can legitimately accompany the owner on aircraft but this has led to a trade in providing alleged fake certificates from online sites. Some have suggested that there are now more fraudulent support animals then there are legitimate ones.

Now the situation has been compounded by the U.S. regulatory authorities designating mini horses as suitable service animals which forces airlines to carry them as well. It is difficult to see where this madness will end.

ESAs can be an ant or an elephant

Over the last few years, the whole situation has become a circus – literally. Because these pets do not require specific training, they can be anything from an ant to an elephant. This is why social media is full of photographs of mini horses, goats, kangaroos, snakes, peacocks, ferrets, lambs, and parrots. Social media in fact loves it with cute and light-hearted videos and photographs making the practice appear fun for all concerned, but on the other hand is it much fun for the animals and other passengers. Many cabin crew also seem to find it “cute”. They may be a comfort to the owner but who is comforting the animal. It has even been known for passengers to bring a support animal to support the support animal.

It has become such a problem that the US Department of Transport is seeking to amend the transportation regulations in 2020 to ensure that “our air transportation system is safe for the traveling public and accessible to individuals with disabilities” and to recognize ESAs as pets rather than service animals. The new rules would not ban airlines from accepting ESAs but would not require airlines to take them and each individual airline could enforce their own rules.

Delta airlines reportedly carries 700 support animals daily and 250,000 annually and they have seen a 84% increase in hygiene and biting  incidents. In 2018 United airlines apparently saw a 75% increase and carried 76,000. It is so out of control that airlines have been compelled to constantly change policies and to compile and amend lists of animals they will accept as well as provide extra forms to complete in regard to the behavioural nature of the animals and insurance risks.

No one seems to be addressing whether all this is necessary in the first place. And have also overlooked the needs of fellow passengers who may have allergies, phobias or just have no wish to travel with a menagerie.

The phrase "only in America" comes to mind but it could happen in the U.K. and elsewhere.

Unfortunately while the USA wrestles with the problem, UK airlines who sensibly do not allow ESAs in the cabin, could face similar problems. There are certain groups in the UK keen to introduce the practice here such as the UK Emotional Support Animal Registry established in 2017 who are pushing for similar legal recognition for dogs and cats which could then give leeway to force airlines to accept them.

Having once spent many years as an animal health inspector at Heathrow Airport enforcing rabies, bird import and animal transport welfare regulations I spent a lot of time catching escaped animals on board aircraft and haranguing various American airlines particularly Pan Am for allowing animals in the cabin. I was called to assist many dogs and cats which were wedged into small containers designed to fit underneath the seats and took many prosecutions for causing what back then we deemed unnecessary suffering and I would hate it all to begin again.


They do not necessarily need us but we need them.


What became completely apparent during the recent worldwide Covid-19 lockdowns is that wildlife would not miss us at all if humanity was to suddenly disappear or reduce drastically in numbers. Wildlife appeared to enjoy this brief hiatus from us finding they could wander freely, unhindered and safe from interruption. They quickly decided to invade our space instead of the other way round. There is probably a great irony somewhere in all this.
Of course, it is a different story for companion animals who are so dependent on us and have seen a lot more of their owners during this period and may be shocked at normality again.
There have been numerous news reports from all parts of the world of timid species being emboldened to explore and venture into territory that was out of bounds just weeks before because of less human activity and even roaming the urban areas. And road kills lessened at an opportune time in many parts of the world for the spring breeding season. There have already been reports of more hedgehogs in the UK this year.
Unfortunately for them it may not take long for the normality to resume and they will be pushed back into their small enclaves and run the gauntlet of human contact. Although we set aside large swathes of land in the name of conserving animals and habitat and give them such impressive names as national parks, reserves and conservation areas, in reality they have become giant adventure playgrounds for us to enjoy mountain biking, hiking, picnicking, rock climbing, kayaking and any other pursuit we can think up with no consideration given to the disturbance to the animals. Far from being safety zones for them we increasingly invade these spaces, and if they should dare to retaliate by attacking us, we kill them.
Bears in U.S. national parks were able to roam freely and unhindered without having to take detours round vehicles and camp sites and they do not have to worry about confronting humans. Rangers have reported a huge increase in bear and wildlife sightings and stated that the bears are “partying” in Yosemite national park. Lions in Kruger national park also took the opportunity to roam freely and sleep wherever they pleased and enjoyed some peace and quiet even taking a nap on the park roads without being surrounded by hordes of tourist vehicles.
Hopefully somewhere in all this there might be a salutary lesson to us perhaps even making us appreciate nature more and an understanding that animals require their space and freedom just like us. Perhaps we should even give some serious thought to whose benefit many of these preserved areas are truly for and put restrictions on the ultimate predator from entering them.