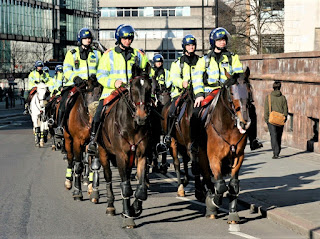 The scenes at the Black Lives Matter Protest in London of a police horse bolting riderless and in terror past the Whitehall Cenotaph while others came under attack from bicycles, flares, fireworks and other  missiles was quite a poignant reminder of the war horses and also raises the question of whether they get enough protection under Finn’s law. The Conservative MP Andrew Griffith thankfully asked this question of Priti Patel  in the House of Commons on Monday 8th. June:

“I am proud that it was a Conservative Government who introduced Finn’s law to protect our service animals. Will my right hon. Friend assure me that she will not rest until the minority of thugs involved in attacking the police horse, as well as, of course, our brave officers, are brought to justice?”

In response the Secretary of State for the Home department said:

“My hon. Friend is absolutely right. What we witnessed at the weekend was utterly despicable. I look forward to visiting the mounted police section quite soon. I have had it with authority from the Metropolitan Police Commissioner that the injuries to the horse were mild, but importantly, she highlighted yet again how the acts of thuggery are disproportionate to not just police officers, but the animals”.

Coincidentally Finn’s Law or as it is formally named The Animal Welfare (Service Animals) Bill came into force exactly a year to the day these incidents occurred. It was named after a German Shepherd Dog that was stabbed chasing an offender and is designed to protect service animals. It was heralded as the answer to protect them but cannot be effective unless it is enforced stringently and greatly publicised to make possible offenders aware of the protection these animals have and the consequences of injuring them.

But there is also a great need for police horses and dogs to be treated in the same way as the officers when it comes to health and safety assessments of their use in each specific operation or situation. In this instance it did not seem sensible or safe for anyone to use them in a charge of the light brigade onslaught in the wet weather conditions to frighten and push a mob from the streets. I am surprised that horse charities and the RSPCA are not more vociferous over this issue. The incident received press coverage across the world which is not a particularly good UK animal welfare image.

Andrew Griffith is obviously concerned about this issue and should be encouraged to do more by contacting him by email on Andrew@GriffithMP.com

READ MORE ON THE SUBJECT BY JOHN BROOKLAND

It was saddening to see yet again police horses finding themselves caught in the middle and being abused, this time in Whitehall, London on Saturday during the Black Lives Matter demonstration. They cease to be horses in these situations and become authoritarian entities and many people who in normal circumstances may treat animals with compassion lose all reason in their efforts to attack or injure the figure sitting on them.

Over the past years we have seen, time and again, police horses put at risk and violently attacked when the frenzy of confrontation gets out of hand. There will always be people who see no harm in hurting animals but putting that aside there is no excuse for throwing bicycles, flares, and other objects at them.

Many will contend that if they were not there they would not get hurt and this is absolutely right as in these modern civilised times they shouldn’t be. But if we are truly civilised we should not be taking out our anger on them, either intentionally or accidentally. In trying to injure or unseat the rider the innocent horse maybe viewed as collateral damage. The police officer could easily be killed or bystanders seriously injured by a fleeing horse. How urbane is that?

And what about the mental impact on the animal as the runaway horse seen on Saturday was clearly terrified? What also was the sense in cantering the horses through a melee on wet slippery roads during a downpour - where was the health and safety risk assessment there? The runaway horse showed extremely good sense by finding its own way home away from the chaos.

We are now well into the 21st century, with the Police possessing high-tech equipment for every eventuality and yet forces around the world still seem unable to combat crime or deal with disturbances without resorting to putting horses (or dogs) at risk on the front-line. The fact that the horses must wear protective equipment is testament to the risk of injury.
In 2018, a police horse name “Morecombe” tragically died after falling on a metal pole which punctured his stomach while patrolling a football match, having slipped while “responding to reports of disorder”. He is not the only fatality in recent years. Although many police forces in the UK have already got rid of their horse section and retired them to normal lives, most still feel a need for them.

When are we going to remove the danger to everyone – horse, rider and public by banishing them to their best and most useful role as ambassadors and ceremonial participants or better still retire them? Once again we have seen that there are no qualms about attacking or injuring a horse regardless of the new “Finn’s law”.