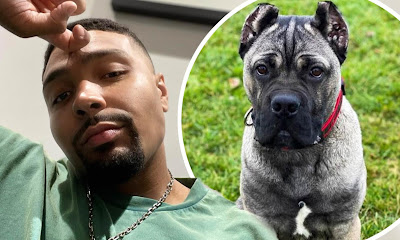 Ear cropping dogs in the UK has been banned since 2006 when the Animal Welfare Act made it illegal, but it is still an increasingly common sight to see these dogs being openly paraded in U.K streets and on social media. This is because ear cropped dogs are readily available from many countries in Europe and the USA and there is no ban on importing them making a mockery of the law.

Over the years there has been a long line of “celebs” parading their cropped and docked dogs on social media all professing either ignorance or indifference to the fact that it fuels the demand, their only interest being the “coolness” of it. The latest is Diversity star Jordan Banjo who in December 2020 posted pictures of his new dog Sergio with cropped ears which was met thankfully, and apparently to his surprise, by a barrage of condemnation. In his defence he is quoted as saying:

”I can't pretend to have known all of the information on cropped ears, I don't even want to pretend to be misinformed, to be blunt I didn't even think about it in the first instance. I didn't get his ears cut, I didn't even import him. It upsets me to think that Sergio or any dog goes through this purely to look 'cooler'” Jordan Banjo

There are no health benefits to ear cropping.

Once dog’s ears or tail are mutilated there is obviously no going back but making it illegal to own one, prosecuting anyone seen with a puppy with hefty fines and publicity given would soon send the word out and help deter people. Dogs could be handed back to the prosecuted owners if circumstances allowed and certified in the same way that some working dogs are, but if the sentencing was severe with a mandatory amount it would eventually curtail the trade.

Cropping is purely cosmetic and has no health benefits. There is no medical evidence that it prevents ear infections as often claimed by its proponents or any other health benefits. It is an inhumane and unnecessary procedure that serves no purpose other than changing the appearance of a dog. It is done more for the vanity of the owner than the well-being of the dog and because of a perverse belief that it makes the dogs look the way they

The ban, like many animal welfare laws in the UK was not given enough thought and was never fit for purpose because it did not make it illegal to own an ear cropped dog imported from abroad.  Taking a dog to another country to have the procedure done in order to  circumvent the law and allowing the suffering to take place elsewhere is also allowed.

There are companies that legally import dogs with cropped ears into the UK and there is nothing to stop owners taking their dogs to countries in Europe that still allow it or even the USA and bring them back. There is little point in reporting them as the owners can legitimately claim they were done abroad.

Finally the UK government has woken up to the situation and are considering changing or tightening the legislation.