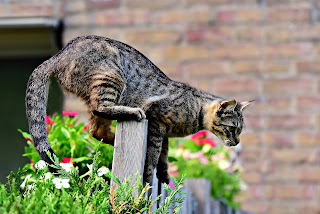 Cats are footloose and free

Unlike any other animal, cats have the unique, quirky and wonderful status under UK law, of the “right to roam“. They do not have to be securely confined and can roam without any fear of legal repercussions for their actions. They cannot trespass so neither the cats or their owners are liable for anything they may do in the way of damage, soiling or causing nuisance which is extremely annoying for those who hate them.

This has come about because like most captive animals,  a cat’s legal status is that of property and to kill or harm them is classified as criminal damage under Criminal Damages Act 1971 or theft under the Theft Act 1968. Their “freedom” is guaranteed under the Animals Act 1971 which makes provision with respect to civil liability for damage done by animals. Cats were assessed as being less likely than other animals to cause damage or injury and so were not included in the Act. Technically we do not even “own” them.

So they are footloose and free in many ways and there is no mandatory need to neuter or vaccinate them, no restriction on how many you can have in your possession, no licensing or registration and no controls over breeding and this is where the problem lies.

This situation in many instances can lead to people taking the law into their own hands and committing retaliatory acts of cruelty on them or even to shoot, poison or otherwise kill them. Some people have even been known to go to the lengths of catching their neighbour’s nuisance cat and abandoning it a long distance away.

Their freedom comes with drawbacks

Although this status is wonderful for the cats it comes with many drawbacks. The lack of control has led to an ongoing “cat crisis” in the UK which has lasted for decades involving thousands of lost, abandoned, and unwanted cats. Charities spend huge amounts each year trying to repatriate them and combat indiscriminate breeding and feckless ownership.

They have  a perceived reputation as a nuisance and many people view them as a vile pest and they hate them. This hatred stems from their destructive behaviours and toiletry habits in garden flower and vegetable beds, their penchant for showing their natural instincts by catching birds, amphibians and small animals and their use of claws to cause damage. Cats face similar problems all over the world, particularly in the USA, Australia and New Zealand.

When it comes to legislation our focus is consistently on dog issues, and cat interests are totally ignored as though they do not matter. It is impossible to ever get control of the cat population, enhance their reputation and to improve their well-being, health, and welfare without some form of legislation. I am not suggesting for one minute that the “freedom to roam” status of cats should be stopped or restricted, but there is a definite need for some form of legislation to protect cats, their ‘owners’ and cat haters from each other and improve the general well-being of UK cats.