Celebrity Chefs, tarantula eating and our love of being made to squirm. 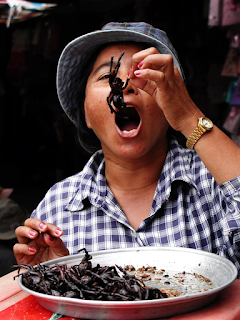 Do we need to see such eating habits being promoted by TV celebrity chefs?

With the ever increasing popularity of veganism and plant based food it is surprising that most celebrity chefs continue to revel in promoting exotic meat eating and even worse, insist on sampling any creature put in front of them.

This is particularly so when let loose in a foreign land with a TV crew and a director who wants some shocking footage to make us squirm and create outrage in order to attract publicity. Many chefs appear happy to go along with the fun of sampling some living or dead exotic creature regardless of the message it might send. But is it really necessary? A local restaurant near me recently received widespread free publicity across the media for their new menu of squirrel and muntjac shot by the chef himself to guarantee freshness and added interest to the story.

People love celebrity chefs, but their behaviour towards the various exotic animals they choose to eat can influence others to follow suit. They should have more responsibility to ensure the message they might portray with their antics takes into consideration animal welfare and rights. But being predominately committed meat eaters it doesn't appear to cross their mind.

We love to see sights that make us squirm.

This sensation seeking follows the pattern of the TV celebrity “get me out of here” programme syndrome and on their safaris to exotic places, their producers and directors know the viewers love to see their stars eating any animal that moves to get a reaction.

No doubt they will counter that it is all in the pursuit of understanding cultural eating habits and pushing the boundaries of gastronomic delights, but of course this could be done without the chef participating. There is no necessity to give everything, no matter how nauseating, a try but better to just pass comment on it and in these Covid times with the alleged links of disease crossovers from eating wildlife it might be a time to discontinue such practices.

Many celebrity chefs have got into trouble.

Many chefs have rightly found themselves in trouble with animal lovers over their eating habits including chef Fearnley-Whittingstall. He is not ashamed about causing controversy by boasting he has eaten giraffe, fruit bats, and squirrels  as long as the animals are killed responsibly. He thankfully draws the line at eating endangered species which is good of him.

In an episode of Ainsley Harriott's Street Food series he is shown in a Korean wet market manhandling and being frightened by a live snake destined for the pot, brushing it off his shoulder to fall to the concrete floor. He commented that he hates live snakes but enjoys eating them.

Gordon Ramsey received what was probably welcome publicity for one of his shows when visiting Cambodia. He attempted to eat a tarantula, a practice known locally as “a-ping.” He failed to get past a piece of crunchy leg so it was a wasted exercise, but it got the reaction required. Such publicity though has made the practice an Instagram must for tourists and has caused the spiders to become increasingly rare and closer to extinction locally.

Rick Stein is also not adverse to trying out anything offered to him especially if it has a marketable cringe factor for the programme such as eating animal eyeballs.  He got into trouble in 2015 when his BBC 2 programme featured him taking part in the cruel practice of feeding coffee beans to badly treated captive civet cats in Indonesia. The poor civets "produce" Kopi Luwak coffee by eating and secreting the coffee berries and of course he had to sample it.

This insistence on sampling and supporting the unnecessary eating of exotic creatures for the camera should be past its sell by date and is overused and celebrity chefs should give more thought to the implications of what they promote. And where are all the celebrity vegan and vegetarian chefs on prime time television?