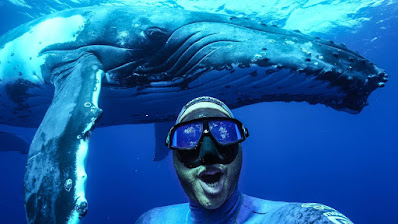 The fact that these gentle whales were using “classic defensive actions” is proof that they were upset and stressed.

Recently on Ningaloo reef off the north west coast of Australia there have been three incidents in just one week involving tourists being seriously injured while swimming with whales on new organised tours. A 27 year old woman suffered broken ribs and internal bleeding when hit by a humpback whale and had to be flown by Flying Doctor to Perth for treatment. A week later another woman suffered the same fate and there have been other incidents to tourists causing minor injuries. All this because entrepreneurs want to add another extreme tourist attraction to visiting the reef. As if disturbing them by shadowing them with boats is not intrusive enough.

In all these incidents there was no malice on the part of the whales just humans getting in their way and upsetting them and posing a perceived threat to their calves. As one tour operator put it:

“The whale immediately swam straight at the group [of tourists] to place herself between her group and her calf and she then engaged in a number of really classic defensive actions right next to the group including slapping her pectoral fins onto the water and slapping her tail down into the water. Unfortunately when she was doing that one of the swimmers was hit by her tail and another was hit by her pectoral fin less seriously.“ Nine News, Perth

These new swimming encounters are being monitored by the Department of Biodiversity, Conservation and Attractions in the Ningaloo Marine Park and will undoubtedly be a great success. They are scheduled to become a permanent licensed industry in 2021 at the completion of a five-year trial and all kinds of regulations, codes of practice and safety procedures are being trialed just so someone can make money out of it, when in fact for the safety and wellbeing of all concerned it would be sensible to ban such ventures. The big question is whether a Government conservation department should be encouraging such ventures.

We all want to be a David Attenborough.

It regrettably seems that there are no limits to the lengths we will go to disturb and stress wild animals in their natural habit in our pursuit of getting up close and personal with them. It is a compulsion that appears to be fueled by social media and wanting to emulate the exploits of icons like David Attenborough Steve Irwin and other wildlife presenters, adventurers and celebrities we see on TV. We have this belief that animals only exist to entertain us and have no interests in a life of their own. Everybody wants to get a piece of animals.

Whether it be be swimming with dolphins, aggravating sharks from the safety of cages, disturbing egg laying turtles, damaging coral, having selfies with drugged up tigers, monkeys or snakes, visiting gorillas or riding on elephants, everybody wants a piece of the action. It is on everyone’s bucket list to get up close and personal with an exotic animal and to have a selfie or photograph taken to put on social media despite the stress, suffering and disturbance caused to the animals.

The problem now is that there are too many people wanting to do it and this just encourages more such wildlife encounters to make it easy for us and we selfishly give little thought to the stress or suffering we may be causing. There is nothing intrinsically wrong with wanting to be in the presence of animals but there has to be a compromise and it should be done from a discreet distance and the right reasons. It should be a respectful and personal experience and not to just to get a selfie photograph or to touch the animal. Unfortunately we are reaching a point where we cannot all be a David Attenborough. We can already view marine animals from a boat so why do we feel the need to get in the water with them.