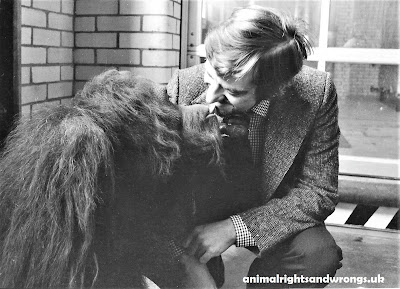 Although I was overwhelmed at meeting C.J I could tell she was not a happy Orangutan.
There have been many animals that I have met during my career which have shaped my attitudes to animal welfare and rights issues and have made a profound life-long impact on me. One of these was meeting a Hollywood star orangutan named C.J.
It occurred in 1979 while I was duty manager at the London Heathrow Animal Quarantine Station, (now the Heathrow Animal Reception Centre), and I had to supervise an overnight stay as a VIP guest. C.J was transiting back to the USA after playing the part of Clyde in the movie Any Which Way You Can with Clint Eastwood.
At one point during our encounter C.J took a fancy to my beard and sidled over, without prompting from the trainer, and stroked it. He stared sadly into my eyes and gave me a kiss and from that moment I have always been convinced that you can tell an animals’ state of well-being by the look in its eyes.
Although completely in awe and overwhelmed at our face to face encounter I could tell that C.J was not a happy Orang and I was saddened and disconcerted at the way the Orang had obviously been humanised, particularly at one point when the trainer made a cup of coffee and lit up a cigar for him. Seeing C.J sitting in our staff lounge with coffee and cigar in hand was not an edifying or humorous experience. There was something very saddening about seeing him doing tricks at the command of the trainer and being so submissive.
The encounter with CJ gave me the firm belief that it was not acceptable to train animals for our entertainment and there was something very wrong with forcibly humanising animals in this way, particularly apes, which after all are more like us than most other creatures and do not deserve to be belittled in this way. With the advent of such brilliant animation by CGI, I just hope that the time is very near when we can consign the use and training of live animals to history.
Information about the life and death of C.J is confused and sketchy and is often muddled with other Orang actors like Manis and Buddha who all played “Clyde” at some stage. They all belonged to the animal training company called Gentle Jungle who perhaps did not live up to their name when it came to looking after their animals. C.J. is said to have been born in the Dallas Zoo and had two trainers, Paul Reynolds and Bill Gage one of which accompanied him when he travelled through Heathrow that day I met CJ.
According to the Los Angeles Times CJ or Clyde was allegedly badly beaten by a trainer for misbehaving during filming of “Any Which way You Can” and died later of a cerebral haemorrhage, but there is much debate about this. Whatever the circumstances of his death, his life was obviously no picnic despite the admiration and media coverage he received, and meeting him just for the those few hours had an indelible affect on me being such a gentle and incredible creature.
at June 22, 2020