Remembering the shooting of Harambe the Gorilla 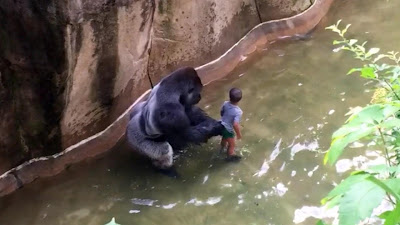 The shooting of Harambe the gorilla at Cincinnati Zoo in May 2016 on the premise that he might have harmed a human was proof that human life will always takes precedence over that of an animal.

Harambe died through no fault of his own.

On the afternoon of 28 May 2016 a three-year-old boy fell into the moat of the gorilla pen at Cincinnati Zoo in the USA, which at the time contained three gorillas. The two females were tempted from the pen, but Harambe, a 17-year-old male endangered lowland gorilla, was fascinated by the child splashing about in the water and went over to investigate. The screaming crowd of onlookers agitated and confused Harambe and he dragged the child through and out of the water.
Zoo officials were afraid for the child’s life and so the zoo marksman was called and Harambe was shot dead. Although the zoo was criticised for not doing more to save the child and Harambe, Mr Holloway, a zoo spokesman stated, ‘screams from the crowd further agitated Harambe and it’s a horrible call to have to make, but human life will always take precedence over the animal.’ The incident became headline news worldwide and caused considerable controversy and a year after his death he had become the biggest meme of the year with memorials held all over the world.

We prefer animals to entertain us rather than seriously conserve them

Harambe died through no fault of his own, but because he fell foul of our human precedence belief and because we like to treat animals as objects of entertainment. Had his enclosure been designed for the safety and interests of the gorillas over that of the public or better still excluding the public to allow Harambe and his mates to get on with conserving their species undisturbed, he would still be alive.
If we can kill such an endangered animal as a gorilla in a breeding programme doesn’t all this make a mockery of our supposed serious intention to preserve animals for the future.
So the moral of the story is that although gorillas are sentient, are an endangered and protected species, are closely related to us and disappearing at an alarming rate in the wild and that Harambe was doing his bit for conserving his species by being part of a breeding program, none of this saved him or was of any consequence.  I suspect that even if he had been the last male gorilla on the planet, his life would not have been  considered more important than that of a human.  Animals will unfortunately always come second to humans whatever the situation or circumstances as we could never bring ourselves to perhaps save an animal at the expense of a member of our own species.